Lately I’ve been sending you charts that crush the standard narrative about the helpfulness of shutdowns, masks, etc.

And I keep thinking: these are surely the best charts I can show you.

And then another day comes along with even better charts.

Remember early on, we’d get snooty headlines about how such-and-such European country flattened the curve and showed us the way, etc.? The subtext was always, “Unlike in the U.S., where the stupid rubes hate science.” Those countries were supposed to have “listened to the science” by locking people down and ruining their lives.

Well, pretty much every single one of the European countries that the media once touted has lately been experiencing a tragic rise in deaths.

This chart shows it all, complete with the triumphalist headlines we heard about some of them. We’ll probably be waiting a long time for any acknowledgments of error: 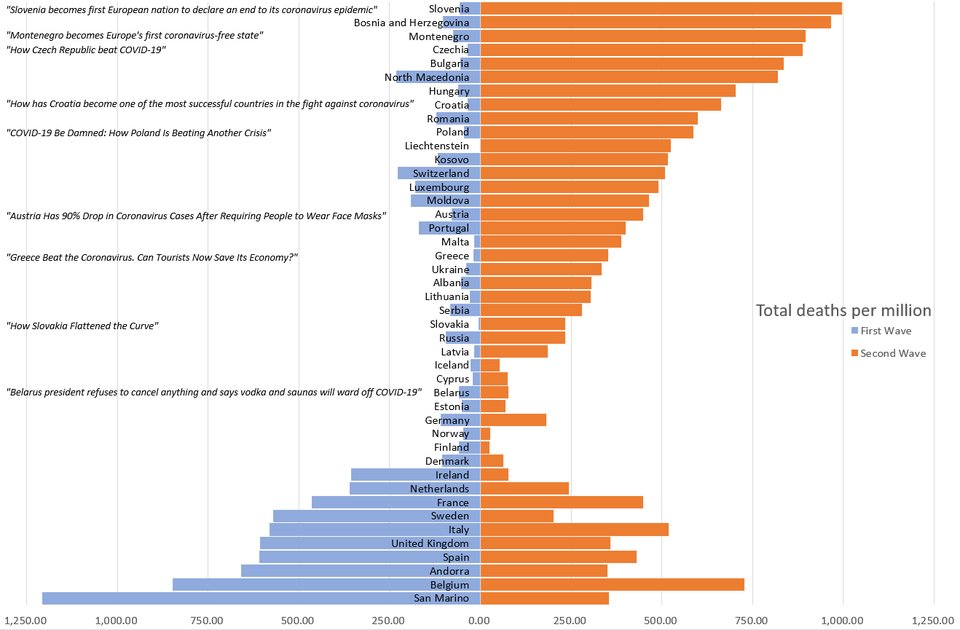 A couple of quick things before wrapping up:

(1) I’ll (of course) be taking Christmas off, but I’ll also probably be a little light next week as well, so I can spend time with the kiddos.

(2) Remember, the folks at Rocket Languages, who have been very good to the Tom Woods Show (and I know the co-founder personally), are having their annual Christmas sale: 60% off all their foreign-language courses — but just the next 45 sold, so it could end at any minute. Enjoy: http://www.tomwoods.com/rocket

Belarus president refuses to cancel anything and says vodka and sauna will ward off COVID-19.

And he has the numbers to prove it!

Or at least, numbers that beat the control-and-intimidate chanting about how masks and lockdowns will save us.

Especially when the numbers demonstrate that they won’t.